Today is National Donut Day and National Fish and Chip Day, a very healthy pairing! Sales of cooking oil must get a massive boost. I have to make a little admission for someone with the seaside on the doorstep,, I don’t eat fish and chips that regularly but when you’ve had a long walk on the beach and the sun is setting, a steaming hot newspaper parcel of freshly fried fish and chips doused in salt and vinegar takes some beating. Now fish and chips have become a British institution served with Tartare sauce, mushy peas, a slice of white bread and butter and a mug of hot tea. Fish and chips have been deconstructed, updated, made into sophisticated Michelin-starred worth dishes, and is a staple of pub menus up and down the land, but the true home of fish and chips is the Chip Shop.

Many fish and chip shops traditionally use a simple water and flour batter, adding a little sodium bicarbonate or baking soda and a little vinegar to create lightness, as they react to form bubbles of carbon dioxide in the batter. Many restaurants now use a beer batter as the naturally present carbon dioxide in the beer lends a lighter texture to the batter. The sugars present in the beer also help produce a wonderful golden brown colour on frying. A simple beer batter might consist of a 2:3 ratio of flour to beer by volume. The type of beer makes the batter taste different, the alcohol itself is cooked off, so little or none remains in the finished fried fish. 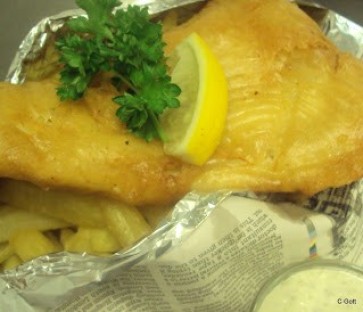 I cannot state how simple my recipe is just beer, flour, and seasoning. No eggs, baking powder, turmeric for colour it could not be easier or tastier. Experiment with some local ales and lagers until you find your own favourite. Lagers are fine and produce very light fine results almost like tempura. I find a nice session bitter or IPA will create a nutty, tasty batter. Your batter is always better made slightly in advance to allow the flour to absorb a little of the liquid and let the gluten relax. Do not make it to early however as the raising agents will effervesce and disappear with time leaving a flat batter mix.

A large Bottle of your favourite Beer

2 kg Lard or Dripping to cook

Sieve the flour into a large bowl and add a generous amount of salt and pepper. With a whisk, mixing continuously, add the beer to the flour until you have a thick, smooth batter about the consistency of thick cream. Place the batter in the fridge to rest for between 30 minutes. In a large heavy bottom pan, heat the oil to 160°C / 320 F using a thermometer to check. If you do not have a thermometer have a few cubes of stale white bread to hand. Place a bread cube in the oil if it rises to the surface and cooks to a golden brown in a couple of minutes the oil is hot enough.

Take two tablespoons of flour and place in a shallow tray, season well. Dredge each fish fillet in the seasoned flour until covered. Shake off excess flour and dip into the batter mix before carefully lowering into the hot oil. Fry the fillets for around eight minutes or until the batter is crisp and golden, turning the fillets from time to time with a large slotted spoon.

When the fish is cooked using the slotted spoon remove the fish from the hot oil, drain on kitchen paper, cover with greaseproof paper and keep hot to serve with homemade chips, a big wedge of lemon and chunky tartare sauce.

What to Drink? Deep-fried fish needs something to lift the palate and pairs well with crisp, dry Chardonnays particular the classic Chablis or a Chenin Blanc and match with the beer or ale you used to make the batter.

Allergens in this recipe are;

This site uses Akismet to reduce spam. Learn how your comment data is processed.

Welcome to An Island Chef blog where I try to write about the food I love to cook ( and eat ! ) and the absolutely fabulous ingredients and local produce available here in the beautiful Channel Islands.

Look out for my new email newsletter ( just sign up at the top of the page ) and allergens highlights in all my new recipes.

Want to know when there is a new Post?